I arose with a buzzing pain in the base of my skull.  The pain was accompanied by the sensation that my throat was constricting and a remarkable lead-like quality in my limbs.   Overall, I would describe this feeling as a “sense of yuck.”   While this “hang-over” sensation in the morning is a common occurrence with my illnesses, the “yuck” that greeted me on Tuesday morning was particularly…well, yucky.

This malaise did not surprise me, nor did it catch me off guard.  Tuesday, May 29th, was my birthday.  My birthday historically carries many negative thoughts and emotions.

With all of my hard work and emotional healing, I would like to think that I would have attained some form of understanding regarding the sense of doom and despair that I feel with the ringing in of the “Megan New Year,” but I have thus far managed to avoid the topic of birthday hatred (maybe because it only happens once a year).

The Friday that I turned 13, I cried. I sobbed. Thirteen was an overall bad year, but the day of my birthday, celebration was cast in the shadows as a deep part of me grieved unknown loss. My parents bought me a piano that year.  I was stoked. But a visceral, uncharted part of my soul felt an unutterably unbelievable grief. “Besides”, I told myself, “No one wants a grumpy birthday girl.”  Thus began the 23-year tradition of the internal birthday self-flagellation.

Here’s my litany of birthday self-talk:

What’s wrong with you?

I am currently reading Girl, Wash Your Face by the delightful and incredibly inspirational Rachel Hollis. In her first non-fiction book, she holds to the light false beliefs she has wrestled and presents helpful strategies to counter these soul-crushing beliefs. As I opened up her book a few days after my birthday,  I was stunned when I read in exact detail my own internal birthday experience.

I let out a sigh of relief: Other people feel this horrible birthday yuck that I experience every year!

I’ve always felt the sense of yuck that meets me on my birthday is deeper than a simple dismay over aging.  It feels so much deeper, more primal, than the surface-level fact of aging.  Hollis confirmed this in her survey of women who struggle with acknowledging and celebrating their birthdays.  Many of us struggle with our birthdays because they stand as a brazen, glaring reminders of how short we have fallen of our dreams, hopes, and goals. Another year has passed, and we are no closer to our dreams than we were when we were a year younger.

For me, my birthday might as well be a sign written in the sky that says in all capitals: “YOU’RE A FAILURE.”

No matter what actually happens on my birthday, the belief that “I am a failure” writes the story of the day.   When faulty beliefs from the past seep into our daily life, they write our present stories no matter how contrary they stand to our current situation.

If I am 100 percent honest, and if we were to peel the onion of my psyche a few layers deeper to the core of the lies, my belief about myself is so much more raw and brutal than the idea that I’m a failure.  The belief “I was never supposed to exist; the world would be better off without me” has written much of my story.  That is the excruciating, soul-suffocating message that echoes in my subconscious and rattles my bones on the day of the celebration of my birth: the day that stands as an agonizing reminder of my seemingly unwelcome existence on this planet.

In all reality, Tuesday was indeed a bit of a nightmare. The kids were unbridled and chaotic.  We had a bit more excitement than I would have cared for. Careless and unkind words were communicated, and for crying out loud, my husband didn’t get me a card!  Lily decided to have a melt down because my birthday was not exciting enough for her tastes, and we didn’t invite all of her preschool friends over to celebrate my birthday.  Never mind that her birthday is less that a month away, and she will have a massive mermaid water party.

After she spent a good 45 minutes sobbing her sweet little almost-five-year-old heart out because my birthday didn’t live up to her standards (Sorry for the excessive italics; I just want to emphasize the drama of the situation), I marched into her room, took her in my arms, and wept with her. (If you can’t beat them, join them, right?)

I make it a point not to “dump my stuff” on my children, but I made the first exception that I have ever made of that policy for my 36thbirthday.  I ugly-cried, dripping tears onto her arms and legs, and she had the audacity to yell at me for crying on her!  I’m a bit foggy on what came out of my mouth at that point, but I laid into her, complained about my bad birthday, how terrible I felt, how unkind my children are, and stuff like that.

Eventually, after half-listening  (as well as a four-year-old can) to my crazed rant, a switch flipped in her head, and she began to realize that there might be other humans on the planet who have feeling too. Hallelujah! She started to stroke my cheek and say words like “sweetie”.  I wasn’t sure if I just broke her for life or if I cured her of her (age-appropriate but still annoying) narcisisim, but we were both in a more stable place about 20 minutes into our cry-fest.

My poor husband, however, came home to two swollen-faced, red-eyed desperate girls and a perfectly placid and relaxed son who had managed to bypass our excessive drama.  In addition to the hysterics, world war three ensued as we tried to pick out a place to eat for my birthday dinner, and then I spilled not one, but two, drinks before bed time.

This year’s birthday was indeed a birthday for the books, but what I really want to communicate is this:  I began to verbalize the nasty, unspoken lies this year.  Up to this point, I don’t believe that my true feelings about my birthday have crossed my lips.

The breaking free process started with a text to my sister-in-law when she texted to wish me happy birthday. I said:  “I feel like a rotten person. I’m not enough.”

At this point, I took one false belief by the neck and dragged it into the light of day. As long as it was rattling around in my head, no one could challenge it.  As a result of this exposure,  Abbey was able to reflect back to me her perception, which was the opposite of my experience, and began with: “What the heck, Megan??!”

Then I opened my mouth and shared the insidious lie out loud to my husband at dinner. Tears filled his eyes, and he told me how valuable I am to him, to our children, to our church, our family, and our friends.  And the truth shocked me. Could it be real? Could I be valuable?

Stepping out of deep lies that are woven into the fabric of our being in a slow process.  It begins by exposing them to the light of day, in presence and guidance of the Spirit of Truth.

When my children ask me about Satan, who he is, what kind of power he possesses, I respond consistently with one answer:  The only power that he has is the power that lives inside his lies. He is the father of lies.  That’s why it is so important that we know the truth.

Lies grow, fester, and multiply in the darkness.  They retain their power when we allow them to remain planted in our souls, unquestioned and unchallenged. Lets invite God to do a deep work in our hearts, illuminating the lies that we don’t even realize exist. Whether we acknowledge it or not, they remain steering our boats in directions that we never intended to go, to destinations that grieve our hearts.

Part of entering into the Kingdom of Light means stepping out of our self-protective kingdoms of brokenness that are erected by the lies that we allow to remain unquestioned.

I have travelled on a long, arduous journey to get to this place of healing, and I have a tremendously long way to go.  And in the midst of it, all is grace.  This is 36, where grace is mounted upon grace, flowing forth from the fullness of God. And this is the year that I start intentionally pulling the idea that I shouldn’t exist into the light and exposing it for what it is: a lie straight from the enemy.

“For from his fullness we have all received, grace upon grace.” (John 1:16, ESV) 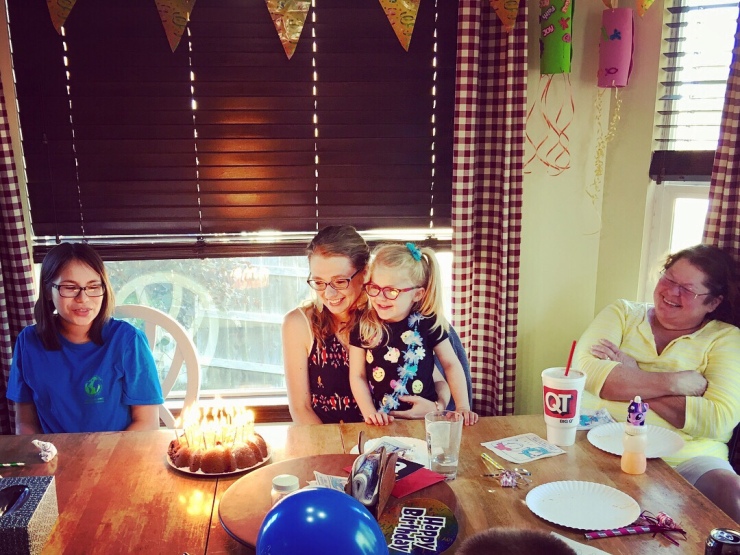 2 thoughts on “When Lies Go Unchallenged”

Can you hear it?

Equipping Christians to Live a Life of Radical Love and Service

Trusting the Love of Jesus Christ, One Day at a Time - Psalm 13:5 NIV, “But I trust in your unfailing love; my heart rejoices in your salvation.”