Now, the Lord is the Spirit, and where the Spirit of the Lord is, there is liberty.  But we all,  with unveiled face, beholding as in a mirror the glory of the Lord, are being transformed into the same image from glory to glory, just as from the Lord, the Spirit.   2 Corinthians 3:17-18

“Megan, can we go back over the chorus one more time, focusing on our parts?”

It’s Wednesday night, a night that I anticipate with joy.  I cling hungrily to any chance that I get to help lead corporate worship with our current worship leader.  But when the microscope is held over my performance, I freeze.  As we lean into parts and processes, I look too hard at myself, losing my song.  I apologize at least ten times, and our worship leader wisely says, “Just belt it.  Get lost in the music again.  It will come. It always comes when you worship”

He’s right.  When I forget myself, and I find myself lost in the vastness of the glory of God in worship, I powerfully hit every (well, almost) note.

There is much discussion in our culture and in modern psychiatry and physiology that music is incredibly helpful for our mind and our body.   Daniel Levitin, a well-known psychologist who studies the neurobiology of music, has documented that music can lower cortisol production, increase dopamine, and lower anxiety levels more effectively than many pharmeseutical treatments.   Music works better than drugs in many cases.  No one really understands why, but my conclusion is that we were created with a proficiency for a language that speaks much deeper than our words.  We were created with hearts that resonate with music, and the Spirit often speaks through music in ways that we cannot hear with simple human words.

Madeline L’Engle, one of my favorite Christian Mystics, in her Wrinkle in Time series, appeals to the heart-language of music as she describes the experience of one of the characters in A Swiftly Tilting Planet:

“[Charles Wallace] was singing a melody he did not know, and yet the notes poured from his throat with the assurance of long familiarity. They moved through the time-spinning reaches of a far galaxy, and he realized that the galaxy itself was a part of  a mighty orchestra, and each star and planet within the galaxy added its own instrument to the music of the spheres.”

For Charles Wallace and for all of us, certain experiences propel us into a beauty much greater than ourselves, as if we were entering into a greater picture of the goodness and beauty of the Creator.

Interestingly, the antagonist of L’Engle’s novels, the Echthroi, are labeled as the “destroyers of the ancient harmonies.”  What about the Echthroi causes them to destroy the orchestra of the universe conducted by the Most High?  The same thing that cast the enemy of our souls, Satan, out of heaven: The desire for self-glory, arrogance, and self-centeredness. This sounds painfully familiar with my struggle on the stage on Sunday mornings.

Our brains are wired for music, beauty, and worship.  We were also created to play our unique and vital part in the orchestra of the the universe as an act of worship to the God of Ages. This often looks like surrendering our pursuit of personal glory as we tune our hearts to God’s melody dancing throughout the universe. Worship is the harmony that is birthed out of the act of humbling one’s self. It is an act of defiance again the flesh that exalts self, adding to the chaos and cacophony of humanity’s fallen song. 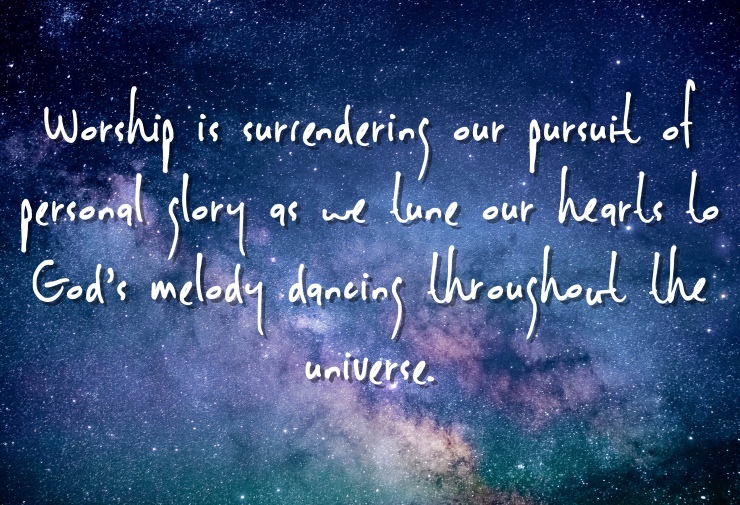 Remember a few weeks ago, when we talked about that glorious sunset?  Do you remember the most probably explanation that C.S. Lewis offered for our insatiable hunger for beauty?  It is the same explanation as our thirst for the music of the universe.  Science says that we are wired for music.  The Christian mystics understand why:  It offers an earthbound, otherworldly, selfless taste of the beauty of God.

Music houses the unveiling that offers me a glimpse into the blinding and dazzling glory of God.  I open my mouth to sing as an act of obedience.  It often involves a heightened awareness of myself for a time, until, mysteriously and subtlety, I loose myself and dive into the praise song of the universe.  It is in these “selfless” moments that I taste what I was craving when I was looking at that awe-inspiring sunset.

The sun, moon, and earth dance and sing to the song of the universe without awareness.  They were created to fulfill their roles within the grander schema of creation, as reflections of God’s glory. They have no other choice.  God did not give them free will, as He gave His children.

We as people, however, have a choice.  We reflect God’s glory when we choose to forget ourselves and engage in unfettered praise of our Creator.  In that choice, we are able to dive into the beauty of that glorious Sunset.  When we stop striving for praise, power, or position, and choose to take the veil off and look into the eyes of God, we say with Isaiah, “Woe is me, for I am ruined! Because I am a man of unclean lips, and I live among a people of unclean lips; for my eyes have seen the King, the Lord of hosts” (6:3).  We also say with John, “When I saw Him, I fell at His feet like a dead man (Revelation 1:17).”

Those in scriptures who saw God immediately went through a sort of death.  They had to die to their inflated visions of themselves.  They died to the theory that they could accomplish anything valuable or lasting through their own power or strength.  This death, however, did not drive them to a place of shame, but instead it empowered them to go forth and live lives of absolute relentless worship.   For after Isaiah called himself ruined and unclean, he was cleansed, and he stood up and declared with more conviction than he had ever known “Here am I! Send me! (6:8)”

When we perceive God with unveiled faces, God humbles and empowers us.  When we pour out our self-interest at the feet of Christ, He then pours His love into our open hearts. 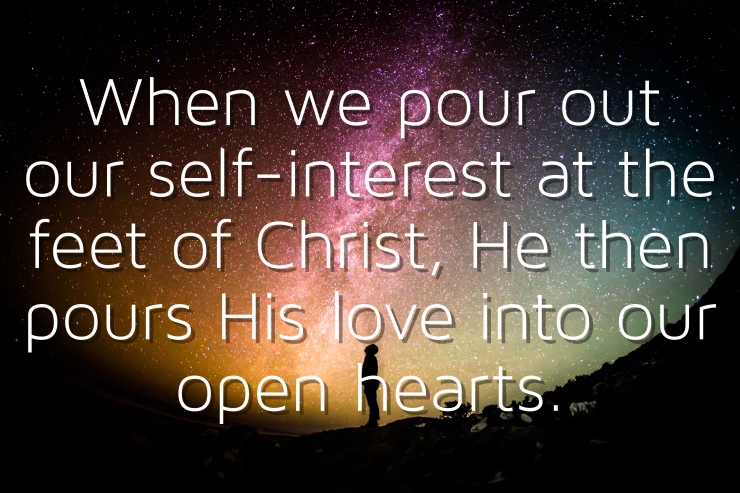 This is my experience with music.  I operate on a continuum at any given time.  Sometimes, I work on skills.   Sometimes I do scales on my piano.  I work on my transition from “chest voice” to “head voice.”  I practice.  I memorize.  I play around with different keys. I experiment with how far I hold the mike from my lips, different types of harmony, vary where I breathe.  All of this prepares me for the “lostness” of self that can happen when I help lead in worship on Sunday mornings.

To loose one’s self in the glory of God takes practice.  It requires stillness and quietness. 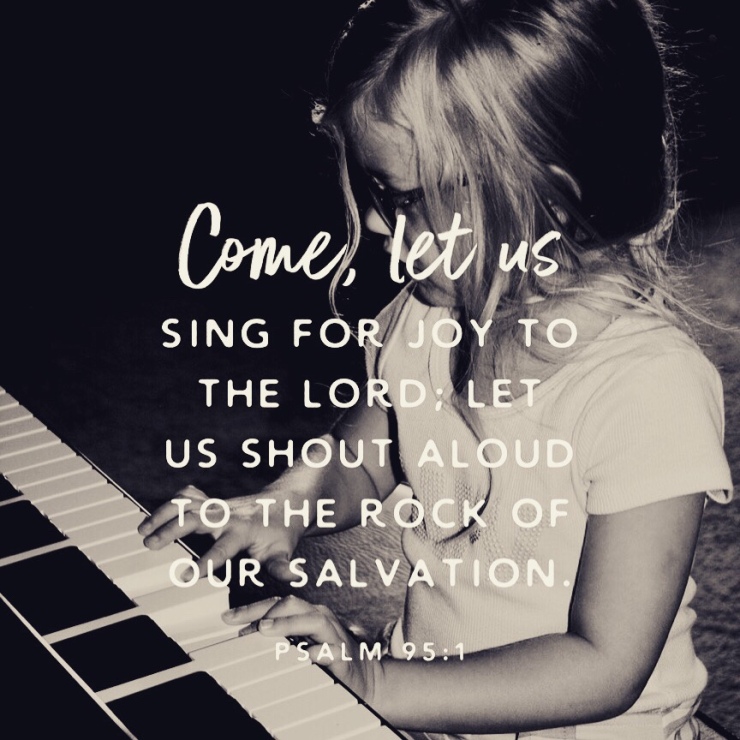 3 thoughts on “Wired for Worship”

Equipping Christians to Live a Life of Radical Love and Service

Trusting the Love of Jesus Christ, One Day at a Time - Psalm 13:5 NIV, “But I trust in your unfailing love; my heart rejoices in your salvation.”